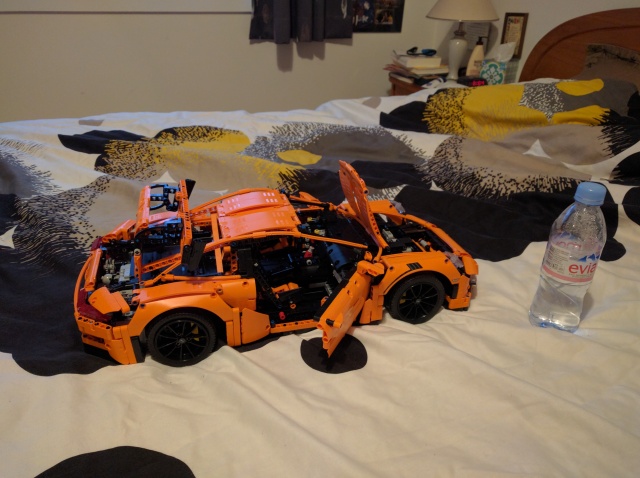 I’ve been a fan of Lego for ages and my only limiting factors are the place it takes and the cost.

Being a car fan, I was pretty excited by the release of the ego 911 GT3RS (Lego 42056). However, this model was not stocked much and is overly expensive, probably to account for the Porsche copyright. This model is one of the biggest Lego Technics set to date (3rd I think) and is also one of the most complex in terms of mechanics, with a 4 speed sequential gearbox and a realistic look and feel.

Deciding that 300+ swiss francs was too much for a toy, I skipped this model…. until a colleague pointed me to LePin.

Until now, I’ve only and ever bough real Legos. My kids got some BanBao bricks which were definitely of lesser quality compared to the danish originals. Some colleagues told me that LePin quality is much higher, on par with original Lego. I used the 11/11 (the Chinese equivalent of black friday or cyber monday) to order a set to try and picked the Porsche model for ~80 dollars (USD, roughly 1/4th of the Swiss price for original lego)

After building it, here are my first thoughts:

My final conclusion is that I would not buy LePin on a standard set, the price difference is not enough to account for the lack of innovation. I’m fine if a group creates alternative original models and cheaper bricks on the ones where the patent expired (I guess it’s not the case for studless). In case of Lepin, the quality is really good (almost the same as Lego, at least in terms of tolerance, I don’t know about time resilience) but he legal aspect seem quite shady.

One thought on “LePin, Lego and Porsche”